What idea generation techniques did you employ for your prototypes? 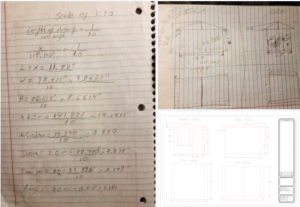 In order to generate the idea, I employed the sketching technique. It was an easy way to put ideas down on paper quickly.  I first draw the design for a house that covered all the requirement dimensions on a notebook; then used AutoCAD to make a 2D drawing to have a better perspective of how the house would look in a smaller scale with the correct dimensions.

Then, I created a 3D drawing of both houses of Guadua bamboo and galvanized steel using AutoCAD. From this way I could have an idea of how they might look in a digital view before jumping to prototyping.

In order for me to create the Guadua bamboo prototype I took advantage of been in Colombia, and I looked for small bamboo sticks to create a smaller version of the house. I went to a bamboo field near the resident I was staying at.

After creating the bamboo prototype, I began to create the galvanized steel prototype. I wanted to choose the materials that are alike to galvanized steel but, I realized that using wood for craft will be a lot easier. So, I created the frame of the prototype house, then painted with metallic finish spray paint, and finally added a corrugated texture.